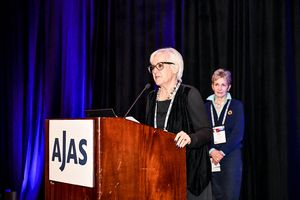 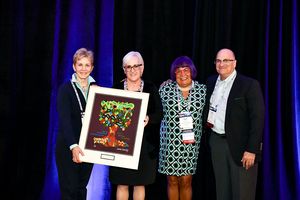 Barbra Gold, Director of the Support program for the Autonomy of Seniors in CIUSSS West-Central Montreal, took home the 2019 Dr. Herbert Shore Award from the Association of Jewish Aging Services (AJAS). This is the top award given by this North American Association and is presented to the outstanding executive professional who best exemplifies the goals and ideals of AJAS and service to Jewish older adults. Barbra was the first Canadian in the history of AJAS to be the organization’s Board Chair from 2009-2011. Donald Berman Maimonides and Donald Berman Jewish Eldercare are blessed to count Barbra as our remarkable leader. For over 25 years, Barbra has devoted herself to the most vulnerable members of our community and has paved a bright and visionary path to the future.  Congratulations on this well-deserved honour!

Donald Berman Maimonides has won the 2017 Innovation Award from Planetree– an international organization focused on resident-centred health care. DBM is being recognized for its innovative iPod program – where iPods are loaded with customized playlists for residents with advanced dementia. This is the second international award for this innovative program, coming on the heels of being recognized by the Association of Jewish Aging Services (AJAS) with its Jewish Programming Award.

Donald Berman Maimonides was the recipient of the 2017 Jewish programming Award from the Association of Jewish Aging Services (AJAS) for its innovative iPod program. Inspired by the award-winning documentary Alive Inside, a pilot program was launched at the Centre, offering residents iPods with customized playlists. The initial cost of the iPods was funded through a generous donation by the iconic Montreal restaurant Wilensky’s.

At the 2013 conference of the Association of Jewish Aging Services held in Los Angeles, Donald Berman Maimonides was presented with the AJAS Award for Jewish Programming in recognition of our Yom Hashoah Service.

Donald Berman Maimonides won one of the top awards from Planetree International. The Centre was awarded the 2013 Spirit of Planetree program award in the category of Architecture-Small Project. The award recognizes the exceptional redesign of our 2nd floor dining room. The award was officially presented at the Planetree conference.
Len Lewkowict, Past President of the Centre Board, was the recipient of the 2012 Association of Jewish Aging Services Trustee of the Year award.

In 2012, after having made a number of transformative changes in her role as Director of Nursing and Clinical Services at Donald Berman Maimonides over the last 15 years, it was a great honour and achievement when Lucie Tremblay was elected to the highest nursing position in the province – as President/Director-General of the Quebec Order of Nurses (Ordre des Infirmières et des Infirmiers du Quebec –OIIQ).

Lucie Tremblay, Director of Nursing and Clinical Services at Donald Berman Maimonides Geriatric Centre and Jewish Eldercare Centre, was recently named the best nurse in Canada by the Canadian College of Health Leaders (CCHL). Ms. Tremblay was presented with the prestigious Nursing Leadership Award, sponsored by Baxter, at the 2011 National Awards Gala in Whistler, British Columbia. The award is given to a nurse at the director or vice-president level who demonstrates an ongoing commitment to quality and leadership in nursing. Ms. Tremblay has been at the Centre since 1998.

At the Planetree conference in Denver, Colorado in October 2010, DBM was presented with the Laura Gilpin Spirit of Kindness award for its extraordinary work in caring for its caregivers.

Fruan Tabamo, Head Nurse 2nd floor, was awarded the Best in Research Award for his poster The Validity and Reliability of Inlow’s 60-second Diabetic Foot Screen Tool at the Canadian Association of Wound Care conference in November 2010.

Barbra Gold, Executive Director of Donald Berman Maimonides Geriatric Centre and Jewish Eldercare Centre, recently received a prestigious award from the Quebec association of health and social service establishments (AQESSS). Ms. Gold received the award given to an Executive Director demonstrating exceptional leadership. She was recognized for being the architect behind a geriatric centre of excellence and for her role in shaping the way geriatric care is provided on a local, national and international level. The award was announced on Ms. Gold’s 20-year anniversary as Executive Director.

Foundation Director Karen Flam is the winner of the Association of Jewish Aging Services (AJAS) Professional of the Year Award for 2010. The award recognizes an individual who reflects the highest standards of professional knowledge and expertise, shows exceptional leadership and is highly respected by, staff, residents and families.

We always seek feedback to make our site better.